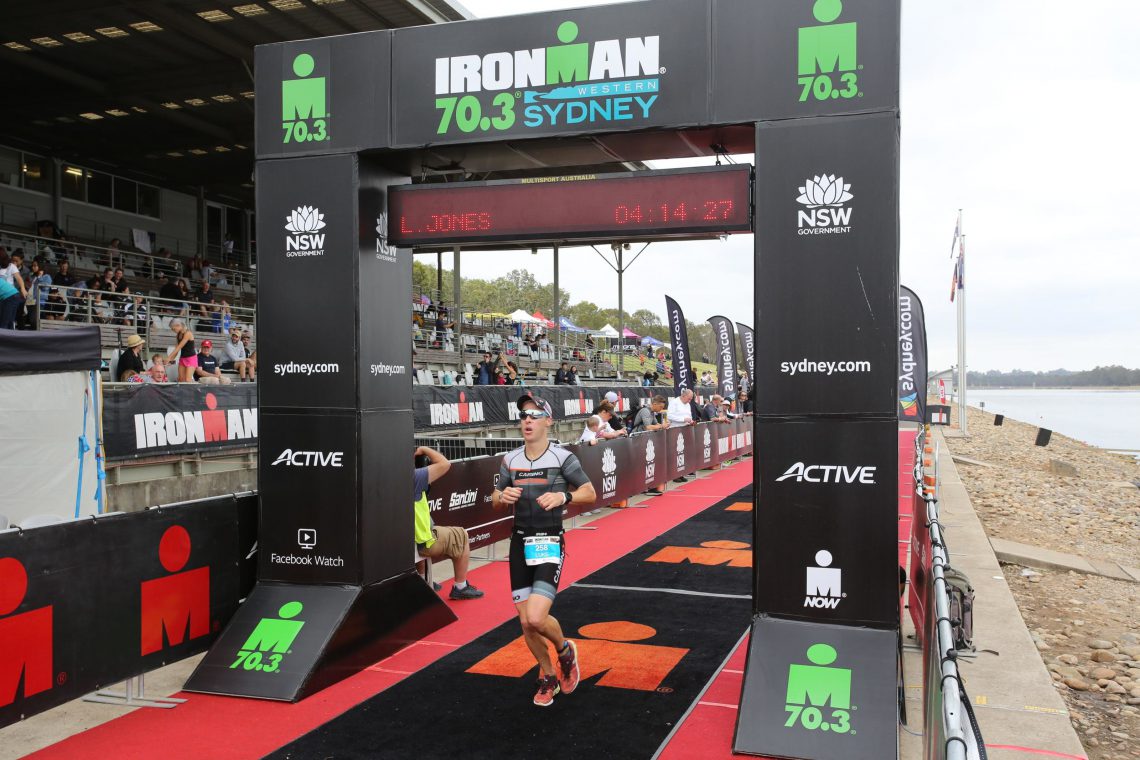 Western Sydney 70.3 last year was my first step up to a long course triathlon. So I was quite excited to race again having an idea about what to expect. Getting to the race venue with plenty of time to set up making transition a very relaxed affair. However, after spending 30mins lining up for the loo most of my ‘spare’ time evaporated. I helped put up the club tent and then realised with some shock that my wave was about to start in less than 5mins and I still hadn’t put my wetsuit on! No time for lube or anything, it was a mad rush to get it on and bolt up to the start area. As I ran up, I already saw my wave (rolling start) were swimming. I ran into the staging area, which was full of the next AG wave getting ready, asked the volunteers to let me through please and I was finally with the others of my AG but at the very back. Realising it was self-seeding I moved as far up as I could to save me having to swim around even more people.

Before I knew it, I was diving off the pontoon into the water; I went straight to the inside of the course where fewer people were. Every couple minutes I had to zigzag around some other swimmers as I progressed through the swim. I reached the first buoy, thinking this was the turning point but quickly realising everyone was still going straight. It seemed like a long way to that first turn buoy; it was a little messy at the buoy but somehow I scooted around making no contact and onto the next buoy.

The rest of the swim was a similar story, sighting to make sure I wasn’t adding distance and also to avoid slower swimmers (as at this stage I was catching other AG waves and came upon them fast). We came to where you’d typically turn in to exit the water, however this year we had to swim under the bridge. I started heading for the wrong arch before I realised my mistake.. at least I had clean water to swim in. I finished my lonely swim in 29:57.

Into transition and I came upon my bike row quickly. I still needed to get my wetsuit off! With the change of the swim, the run to transition was shorter than last year. I can see the car parking line, my bike is nearby.. thankfully I’ve got my arms out of the wetsuit and its ready to come off. There’s my bike, helmet on, finish taking wetsuit completely off, let’s run! I ran out of transition in a time of 1:36.

Thoughts: think aero – be aero, ride above 80% FTP, you can go under 2:20! I took a while getting my feet into my shoes as I just focused on getting going into a bit of a rhythm. Got my feet into my shoes eventually, through a little technical section and out onto the open road. Focus on keeping my power even. I went well for the first 30km, then my focus started to wane as I struggled to find my groove post technical sections. I was passed about 40km which is exactly what I needed, and I gave chase. It was so much easier to push having someone to chase. For the next 10km the gap between 15-50m as I tried to just ride a steady power.

On the 2nd lap, I took the lead again, and a bit of a pace train formed for 10-15km. Occasionally someone else would take the lead, but it didn’t seem to last long before I was in front again. I caught and passed a friend from parkrun (James Broderick), who then unleashed a watt Bazooka and blasted back past and up the road, only to be reeled back in a few minutes later. After the turnaround point, a bit over 20km to go, I saw no one again as I tried to remain focused to the end. Final thoughts: stay aero – check, ride above 80% ftp – that seems like hard work – maybe next time, finish bike leg under 2:20 – you will do it! Flying toward transition I wasn’t wholly prepared for how soon the dismount line would be, as I hadn’t got my feet out of my shoes before the final corner. I literally had to stop just before the line to get off the bike in time, thankfully not falling. But I kicked my rear bottle to the kerb dismounting. Get it? Nah we’re racing here, and I can go under 4:10! Finished bike leg in 2:17:33.

T2 was clean. Found my rack spot and racked my bike. The rack was so high that my bike hung suspended above the ground when racked, so I really hoped it wouldn’t get knocked off! Socks on, shoes on, grab everything else and dash to the exit in 1:16.

As I exited onto the run, the thoughts raced through my mind; take it easy and settle in to it, but don’t waste too much time as it’ll be hard to make it up again. The first km of the run was good, then I got a stitch. To push through or back off? With over 19km to go the answer was clear, back off. After a km thankfully the stitch went away, I ran up a little hill and now was the time to get cracking towards my goal. Unfortunately, it quickly became clear that 4:10 was definitely not going to happen. However, after 10km things started to get really challenging, I tried to push myself to go faster, but my body wouldn’t listen. I tried driving my stride with my arms, thinking about being light on my feet (as by this stage I could feel some blisters) but everything I did, didn’t seem to impact my pace.

James Broderick came flying past to the cheers of his family, for a microsecond I considered upping the pace to go with him, but who was I kidding? He was going fast, and I was just holding things together. I finally caught up to Damien in my AG, he said ‘keep with it you never know what will happen to those ahead’, giving me a tiny boost which was short-lived. My heart rate wasn’t high, but it took a huge amount of focus to keep going when all I wanted to do was stop and walk. With only 4km to go, I thought surely I can lift my pace a few seconds per km, but try as I might it just wasn’t happening. I caught another from my AG with a few 100m to go, he came back at me towards the finish line, but I had him covered. I finished the run leg in 1:24:08.

This is my 3rd 70.3 and definitely my loneliest, finishing in an overall time of 4:14:28. I really am thrilled with my swim and bike legs, putting together legs I knew I was capable of, but often doubted I could.

I can see the benefits of the rolling start swim, as it definitely splits things up, but the racer in me loves the competition and how that drives you to do things you never thought possible. Racing 90% solo for over 4hrs is a very challenging prospect, and yes, in this case, the main fault was my own for not keeping more track of the time. Thankfully, I have another 70.3 in 10 day’s time, which I intend to line up at the front and hopefully swim with those of similar ability. Maybe it will provide more opportunities to race!

Having had some time to reflect on the race and look at my data, I realise for the intensity that I’m racing at I’ve been probably under fueling on the nutrition side. I calculated that I was consuming ~45g an hour which is lower than recommended. Also, I’m probably not as efficient at running as I’ve been previously, not having the volume this year with injuries. Although, with a race shortly, I will test my nutrition theory and share my findings. One thing is for sure, I definitely won’t be in any better shape than I was for this race, so if there is a dramatic performance boost it won’t have been from training. Wish me luck 🙂 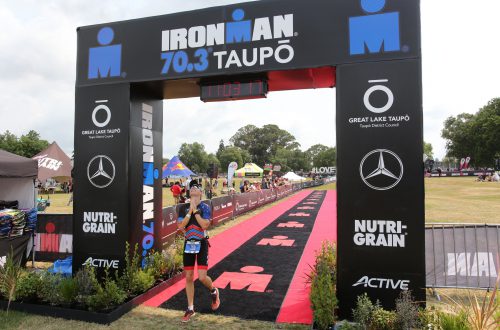 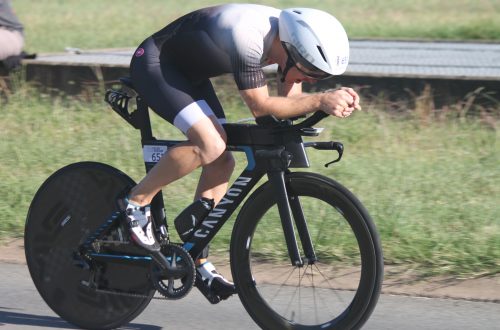 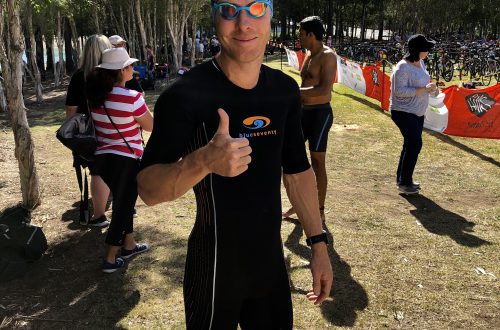