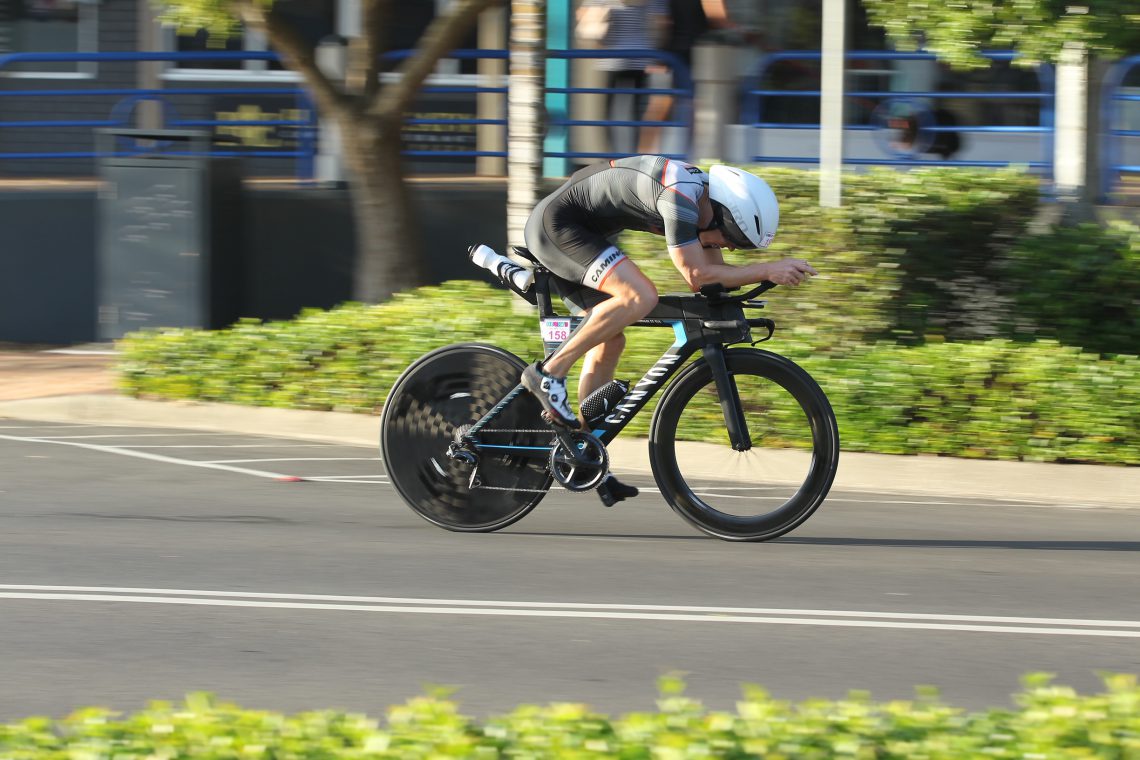 The Husky triathlon is a race I’d been looking forward to. It’s the last race I was focused on for this season and I was quite nervous about it. I was even a little fearful after hurting my achilles only 2 weeks prior to the event, wondering whether I could finish the run and if I did, would it be at my long-term determent?

I had the best sleep (only woke twice through the night) I’ve had pre-race and was awakened by my alarm. Staying close to the transition was a bonus, as it made it reduced my stress getting all set up and ready for the day ahead. I realised I didn’t have the t-piece to inflate the rear disc, so contented myself with what I guessed would be around 50-60 PSI. It’s a rough bike leg anyway, so it might be slower, but more comfort wouldn’t be a bad thing. I got my wetsuit on and still had plenty of time till race start, so went for a warm-up swim. Having finished my swim, I went to wait on the shore for my wave start.

Into the water and with a low tide, it seemed best to stand on the rocks for a mini dive start. Beep, it was ‘go time’. I swam hard and was staying with the front pack, but then I realised the water was coming into my goggles and it really hurt. I slowed to sort it out, then took more strokes, and it happened again. Once again I slowed to let the water out. A few more strokes and yet more water was coming in, this had never happened before. I stopped completely, trying to adjust my straps to the widest part of my head so I could get a tighter seal. I didn’t have it tight, and I regretted not having checked this better before the race. By this stage, the pack had swamped me and they relegated me towards the back, floating on my back lightly kicking trying to sort myself out.

My race result I’d been shooting for seemed over before my day had begun. But then another voice said ‘you never know what can happen, don’t give up’. I tried to ignore the little bits of water but found myself stopping one more time to let it out. At this point, I told myself to stop being a sook and just put up with it. From then on, that is what I did. I moved back up through the swim packs trying the best I could. I swam a little wider than most to avoid traffic. On the final return to shore, when I was getting close, I stopped continuing to sight. I was doing one last hard push to finish the swim and promptly slammed into a pylon covered in barnacles. Ouch! My hand stung but I started going again for the shore. Swim leg was 31:31. 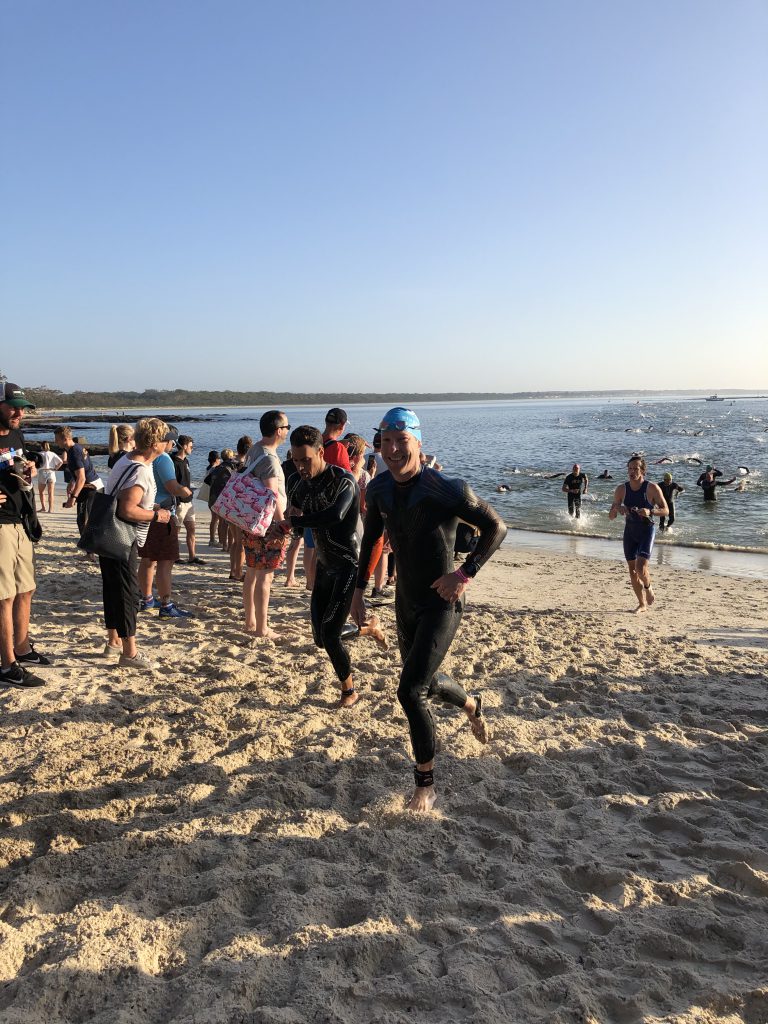 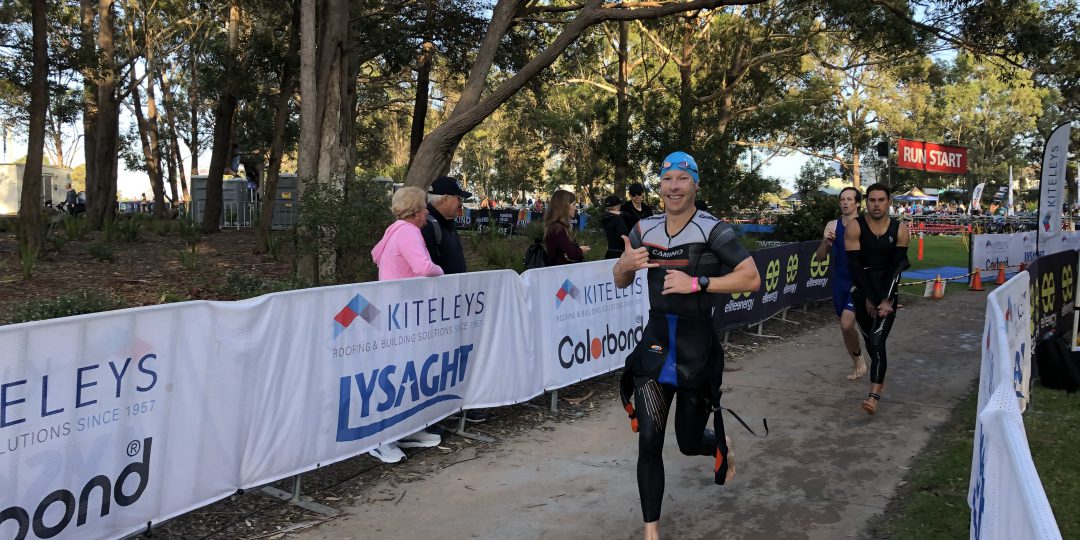 Into transition and I was trying to catch my breath as I stripped off the wetsuit. Helmet on and run to the exit. Unfortunately, with my less than idea swim, there was a lot of traffic in transition. I called out ‘on your right’ as I ran, but it slowed my progress as I tried to run with my bike. T1 time was 1:58.

My bike is a joy to ride. It’s taken 3 years to get this setup and I really enjoy it. I’ve always enjoyed going fast, I think that was what drew me to motorsport. Flying along on the aerobars I feel exposed when I’m tucked I really can’t see more than 10-15m ahead and this seems to heighten the sense of speed. I was bracing myself for a solo ride, but after 15-20km I realised I had company in the form of Matt Plohl. He was pushing the pace more on the uphills and over the next 20-25km we yo-yo’d back and forth over different parts of the course. On the 2nd lap heading up one hill I tried to maintain my pace a little better. I got to the turnaround and saw Matt had dropped back. ‘Well there goes company for this bike leg’ I thought. Guess it will be a solo effort from here on out.

I noticed the heat beaming down on my back as sweat trickled down my helmet visor. I considered flipping it up, but there wasn’t too much to go till the run. Holding the effort was getting harder, but it wasn’t far to go now. I caught the 2nd lead female with 5km to go on the bike leg, on a neat little downhill section into a short little climb which I powered up and over to keep the momentum going (joys of 3 laps, you learn the course) into another slight decent. Finished the bike leg in 2:22:09.

Transition now was empty, but it was a long run to my rack position. It hurt my feet running barefoot to the end, but on the positive side my achilles was holding up! Bike racked, helmet off, socks on, then shoes and grabbed my bundle of stuff and started for the exit. Transition 2 was 1:07.

I was trying not to drop anything as I started out onto the run. It seemed like I had a lot in my hands. I got my hat on first, sunnies, and then to sort out the race belt. Whoops, I had 2 race belts from my setup in the morning. I threw the extra race belt to some supporters as I ran by. I spotted my family which raised my spirits as I got high 5s all round. I was cruising along at 80min pace and energy wise feeling good. I’d taken a gel with 10min to go on the bike and had 2 more for the run. 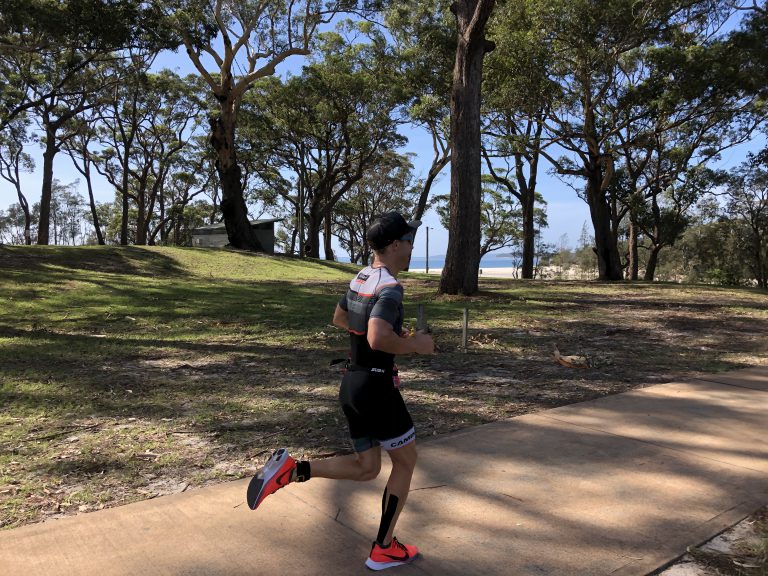 Ben Bell cruised up on me about 2km into the run and asked if I was in the lead for AGer, I said ‘I had no idea but I didn’t think so’! He pushed on leaving me in his dust. I was running sub 3:50/km and didn’t think it wise to give chase this early into a half marathon! My achilles was feeling ok, and I tried to focused on keeping light on my feet. I saw the pros coming in the other direction and started my count. 1,2,3,4,5,6.. and then nothing for ages. Finally spotted Sarah Cowley and shortly after what I guessed to be the AGers. 1,2,3,4,5 and there’s Ben in hot pursuit!

15km still to go, I thought, just hold steady and you’ll be right. But then the stitches started, I tried to ignore it and slowed a little but couldn’t shake the pain. It became too much, and it forced me to walk. I felt better, but after 10 secs it wasn’t improving quickly enough and I was losing lots of time at my pace. I started to jog again, and the pain wasn’t any worse. I increased the pace to a run, albeit slower than before. I was thinking what could it be? It’s still quite a way to go, I need to sort this out. 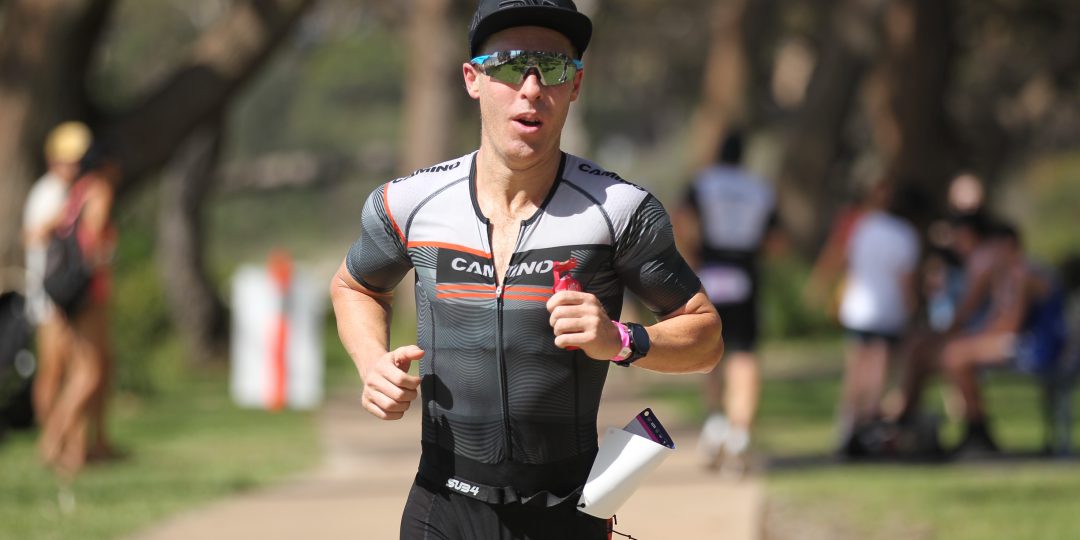 I slowed at the next aid station and get in some water and see how I felt. Within a couple of minutes, I felt heaps better! From then on I focused on getting more than a sip of water at each aid station as I continued the run. I was catching some of the AGers but not quite the gains I’d hoped for. Did someone turn the heaters up? It was getting super hot. To add some more challenge to the mix, I was feeling some blisters, and it was a difficult choice whether to tip water over me to cool (knowing it would make my feet wet), or deal with the heat and not make my blisters exponentially worse. I chose to deal with the heat. Still, my achilles was holding up well, and I was thankful for that!

Only 5km to go! I’d passed 2-3 people but saw I needed to close 2.5 mins over the final kms to get the next AGer ahead of me. I made a deal with myself, 20-minute parkrun, just hold 4min/km, but it was so hot. My pace slipped a few seconds each km on the deal I made, I tried to make good on the deal, but it felt futile. I tried to rally myself that I had less than 10mins and it would be over. My heart rate was soaring even if my pace wasn’t. Then the transition came into view, and I gave a final dig. Dashing over the line in a time of 1:22:53.

It wasn’t what I was expecting from my race, but I still finished in a respectable time of 4:19:41, 10th OA and 2nd in AG. However, as I’m part of triathlon Australia and the winner wasn’t, they awarded me the state champion long course title too. Technicalities. There are minutes I left out there on the course which I’m a little disappointed in myself for, but that’s racing. But don’t get me wrong, I’m very grateful that I could complete the race, even as late as Saturday I was unsure about the run (it was uncomfortable walking). A big thank you to Balmain Sports Medicine for aiding me to do what I enjoy. It would have been a different story, without the help. 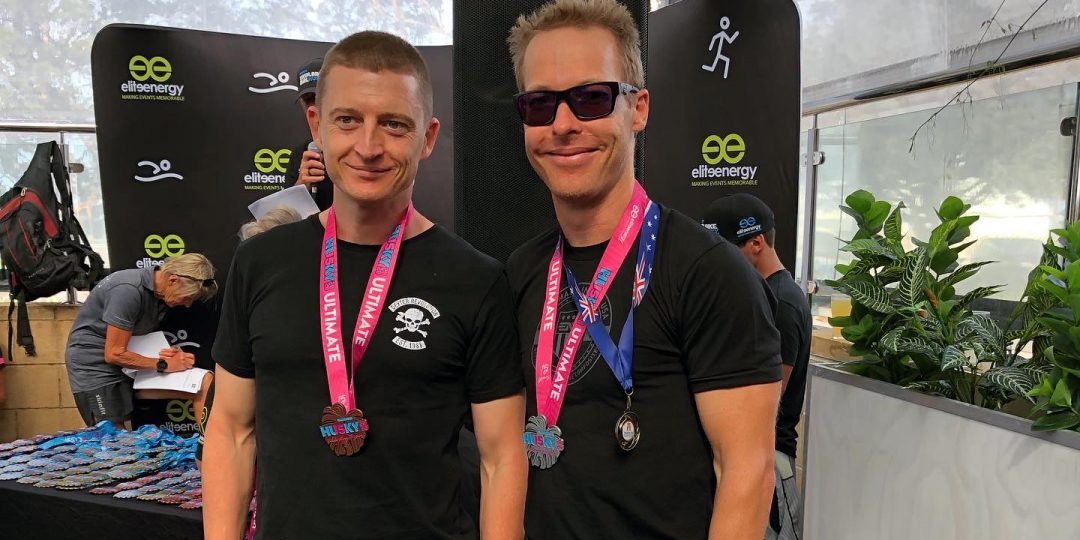 Racing always provides opportunities to learn, but even more so when things go wrong. The big takeaways from this race were: 1) don’t remove your goggles after you go for a swim, as the suction is never so good on a wet face! 2) Drink more water with your gels, even if you slow down 2-3 secs its time well spent. I drank nothing much for the first 5-6km and suffered because of that choice. 3) Make sure you know where all your kit is, I found the T-piece for the disc later in the afternoon as I packed the car (I brought it, just forgot the fact!). 4) It doesn’t hurt to double-check your run bundle by spreading it out and recombining, double/triple check if necessary.

I really enjoy racing at Huskisson and a big thank you to my wife and family coming down to support me. I couldn’t do it without them. Also, thank you to the support from blueseventy and enve wheels, racing is always easier when you use great products!

P.S. I only got minor cuts on my hand from my run in with the pylon, and thankfully it’s not infected 🙂 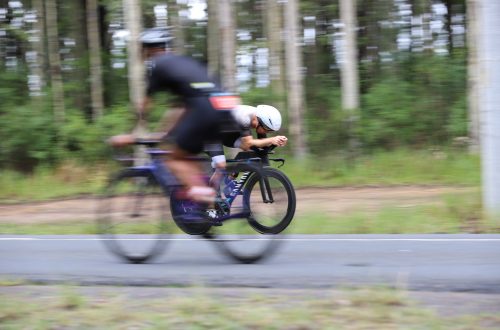 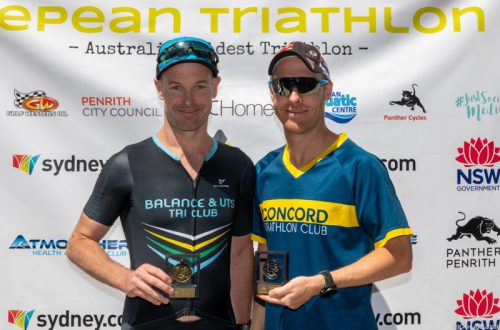 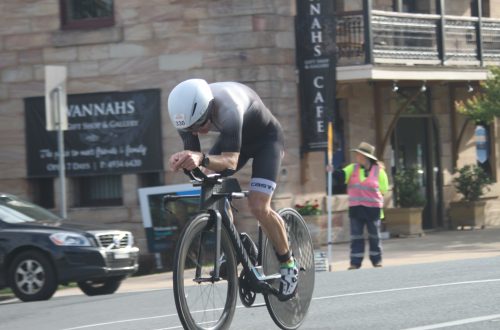